Muhammad Abd al-Majid Hilmi, the 1920s King of Gossip, and His Enemies

The Egyptian press in the early twentieth century was no place for the faint hearted. Still, those brave enough to enter this world were constantly starting new magazines, journals, and newspapers. This is no surprise; launching a successful periodical could lead to significant power and influence in the cultural or political world of the time. Simply publishing a magazine was only the first step on a journey that many ill-fated publications did not complete. Editors and writers had to come up with clever strategies to ensure the readership and circulation that would allow them to continue working. To see how this world worked, let us turn to the career of the young theatre critic from Assiut, Muhammad Abd al-Majid Hilmi. In his two-year spell as editor of al-Masrah magazine in the 1920s, he showed the lengths that some editors went to and the creative tactics that they used to make their products stand out in the crowded marketplace.

Hilmi was a gifted student at Assiut Secondary School. In 1920, while still at school, he sent some of his writing to the newspaper Abu al-Hawl. They were so impressed that they sent a letter to Assiut to ask if he was, really, still a student. He confirmed that he was and was soon writing regularly for them. After he had graduated from secondary school (in either 1921 or 22) he moved to Cairo and began to write for Kawkab al-Sharq. Before long, Hilmi had made friends with Gamal al-Din Hafez Awad, the critic for Khayyal al-Zill. The two soon began to talk about the state of theatre criticism in Egypt. Awad says that they both used to go to the theatre every day and covered everything they could find that was connected to the stage; still, they felt limited in what they could write in their newspapers. Then, the idea to start a magazine dedicated to theatre alone came to them. Before long, they had submitted an application to start al-Masrah and on 9 November 1925 the first issue was published. It was to be, according to Hilmi, “a weapon in the arsenal of artistic jihad, for the sake of an artistic renaissance.” And, it would have a unique selling point as the only specialist theatre magazine in Egypt.

Al-Masrah primarily covered the theatrical goings-on in Egypt but it also featured broader articles on European theatre as well as historical and theoretical articles. The first issues include, for instance, a discussion of Beethoven’s music and the play Hamlet alongside news about Egyptian theatre troupes, writers and actors and an article on the Egyptian national anthem. The editors made sure the magazine contained the subject matter to appeal to a wide readership. They were also savvy enough to know that this alone was not enough, and they devised several other strategies to grab the public’s attention.

Firstly, al-Masrah was visually striking. Every 32-page issue featured an eye-catching, coloured cover with a prominent headshot of a theatrical star—usually, but not exclusively, female. Throughout, the magazine was full of more pictures of actors and actresses, sometimes in a professional capacity and sometimes at home or on their holidays. Since it was very difficult (perhaps impossible) to take photographs during theatrical performances, Hilmi employed the Turkish cartoonist “Rifqi Bey” to draw some sketches of the action of the popular plays of the moment. Browsing through the pages of al-Masrah made the theatre scene in 1920s Egypt seem wonderfully glamorous. All the women were flappers, who reclined on their chaises-longues at home after performances. All the men were elegant and dapper.

Unlike the more serious periodicals like al-Hilal, which focused on improving the mind of the reader, al-Masrah made sure to indulge the reader’s desires for fun and rumour. Every issue started with two pages of theatrical gossip by “Charlie Chaplin” (which I assume was a pseudonym for Hilmi). In later issues this was expanded to three pages, sometimes more. The magazine talked about the private lives of the stars as much as any of the plays they were producing. Al-Masrah also published satirical “trials” of actors and actresses, which poked fun at the eccentricities of their styles. A few issues had a section of “frivolities” (fukahāt), one of which spent a whole page making fun of the dandy Sheikh Hamed Morsi for spending 21 Egyptian pounds on a shirt.

The main tactic that Hilmi relied upon is rather more surprising. The principal way he ensured that al-Masrah was a relevant cultural phenomenon was by making powerful enemies. From the very first issue, al-Masrah launched a relentless attack on Yussef Wahby, probably the biggest star of 1920s Egyptian theatre and the head of the most important troupe (Ramses Troupe). Hilmi began by trashing Wahby’s production of “The Plague”. In later issues, he went on to insinuate that Wahby had lied about his dramatic training in Italy and hinted that he was having a string of extra-marital affairs. During one of Wahby’s tours to Upper Egypt, Hilmi had all of the mirrors removed from his dressing room in Assiut so the performers could not do their makeup.

Wahby was not the only target that Hilmi had in his sights. He also spread rumours about the morality of the star Umm Kalthoum, speculating that she had married one of the supporters who flocked to her house. Virginia Danielson, in her book The Voice of Egypt, says that these rumours almost ended her career, as her father threatened to take her back to the family village. Danielson suspects the influence of the singer and actress Mounira Mahdeyya, who was a big rival of Umm Kalthoum and a friend of Hilmi. Mahdeyya’s picture appears on the cover of the first issue of the magazine, and Danielson said that she claimed to “supervise the magazine’s editing and organization of the articles and pictures”. (We might speculate too that the feud with Wahby sprung from Hilmi’s friendship with Rose al-Yussef).

To attack two of the biggest rising stars of the 1920s has always seemed to me like a strange editorial choice. That was until this year. In the US (as well as much of the rest of the world) there seems to be a small industry forming based mostly on attacking Donald Trump. There is a race to be the first person to respond to his tweets, and interpreters of Trump’s actions are in high demand. Sales of major newspapers like the New York Times and Washington Post have increased hugely since Trump’s election.

Journals in the 1920s needed to be read. Hilmi and his partner, Gamal al-Din Awad, tried a variety of tactics and tricks to ensure their success. Some techniques were a little sordid, but al-Masrah succeeded in becoming the first important Egyptian journal of theatre. The name was subsequently revived for the most important theatrical periodical of the 1960s, to which the legendary University of Chicago Arabic Professor, Farouk Mustafa, was a regular contributor. There is still a quarterly magazine called al-Masrah published in Egypt today.

In the end, it was not lack of popularity that ended al-Masrah’s run in the 1920s, but rather Hilmi’s sudden and unexpected death in 1927. In his obituaries, his age is not mentioned but, given that he graduated from secondary school around 1921, he could not have been older than his mid-20s. During a trip to Palestine he had pains in his chest and so returned quickly to Egypt but died shortly after. The magazine was relaunched in October 1927 as al-Naqid, but without Hilmi’s acerbic editorial voice, it faded into obscurity. Today, this two-year run of al-Masrah magazine stands as the most important thing to survive from Muhammad Abd al-Majid Hilmi’s short life: an example of the cut-throat world of 1920s journalism in Egypt and a celebration of an Egyptian theatrical movement that was growing in stature.

Raphael Cormack earned his Ph.D. in Arabic literature from the University of Edinburgh and is editor, with Max Shmookler, of The Book of Khartoum, a collection of Sudanese short stories. 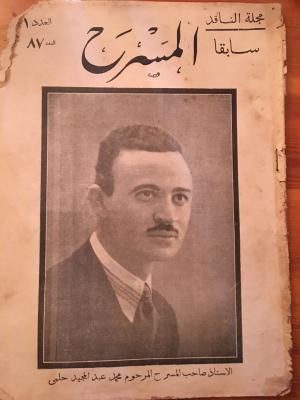