Minorities and the Kurdish Referendum

"We must write a new constitution for the region [Kurdistan Regional Government] that guarantees the rights of all components, and reassures them of their role in writing the constitution for an independent Kurdistan. We need a new national anthem, and changes to the Kurdistani flag so that it includes symbols of the components and is reflective of all." 1   -Masoud Barzani, August 2017

"In addition to the threat which this war has aimed at the existence and legitimate aspirations of our people, both Kurds and Assyrians, it has brought disaster and affliction upon all its victims, deprived the people of Kurdistan, particularly the Assyrians and the Kurds, of education and health [needs], and rendered tens of thousands of them refugees. All these [calamities] have been inflicted upon us only because we have claimed the basic and legitimate human and national rights, to which we, like any other people, are entitled." 2  -Mustafa Barzani, 1967

Faced with reluctance towards and outright rejection of the Kurdish referendum, Masoud Barzani, president of the Kurdistan Regional Government (KRG) and leader of the Kurdistan Democratic Party (KDP), has turned to minorities for support. Under increased pressure and feeling more isolated, Kurdish politicians are resorting to a tactic they abandoned in 2003: negotiating with minorities. The similarities between the two quotations above, half a century apart, are revealing of an earlier period of political maneuvering and cross-communal partnership. Is it too late for negotiations? And have the historic links – cultural, economic, political – connecting the diverse ethno-religious communities in this region become too disrupted?

Though treated as welcome “guests” of the Kurdistan Regional Government, many of these “components,” to use Barzani’s term, are historic communities indigenous to the region. They include ethno-religious and linguistic groups, like the Assyrians, an Aramaic-speaking community belonging to a handful of Syriac Christian denominations; the Yezidis; and the Turkomen. Over the course of the twentieth-century and into the twenty-first, all of these communities have experienced dramatic shifts in their status. With the rise of nationalist and extremist ideologies, several events (Genocide of 1915, Simele Massacre 1933, Anfal Campaign 1988, and most recently ISIS) have precipitated significant declines in their numbers.

Kurdish policymakers and diplomats in the US have attempted to present the KRG as providing a safe haven for minorities that have escaped persecution in the rest of Iraq. This narrative, however, should be challenged on a few grounds.

The Kurds and Assyrians have deep cultural roots across the same region, and members of both communities began migrating to major urban centers in the second half of the twentieth-century in search of better educational and employment opportunities, mainly in the oil and transportation districts (Kirkuk, Baghdad and Basra). Following the civil war in 1961 between the Iraqi state and the Kurds, who were supported by various Assyrian groups and Iraqi leftists, many Assyrian villages were destroyed. The 1975 Algiers Agreement between Iraq and Iran put an end to Iranian support for the Iraqi opposition, and saw the onset of government campaigns against Kurdish and Assyrian villages along the Turkish and Iranian borders that persisted into the 1980s. Hundreds of thousands of Assyrian villagers were displaced, and their crops and cultural sites were destroyed. Most were forcibly removed from their ancestral lands and relocated in central and southern parts of the country. Iraq’s Ba‘ath regime subjected the Kurds and other groups inhabiting the territorial remit of today’s KRG to forced demographic movement – particularly in oil-rich Kirkuk, which was heavily populated by non-Arabs.

Though divided by periods of violence – for example, the Kurds were deployed by the Ottoman state in the 1915 Genocide against Assyrian and Armenian minorities, whose removal they ultimately benefited from economically – the Kurds and Assyrians have shared a similar fate, pursuing common political goals for most of the twentieth century. Both communities historically leaned left, joining parties espousing secular, nonsectarian principles. Kurds and Assyrians subscribed to leftist ideals that supported workers’ and farmers’ rights. Moreover, the pro-Iraqist political stance of leftist parties appealed to Assyrians and Kurds alike, who felt alienated from Arab nationalist and conservative ideologies.

Both economically and culturally marginalized, and under the influence of the powerful Barzani network, Assyrians joined the Kurdish uprising of 1961. Later, in the 1980s, Assyrians participated in the formal Iraqi opposition. In the early 1970s, 3,000 Assyrian men enlisted in the battalion of the Higher Committee for Christian Affairs in the north. In 1982 the Assyrian Democratic Movement – a political party founded by Assyrian students and youth – moved its bases to the north. Eventually, thousands joined its militia, which fought Saddam’s authoritarian regime alongside Kurdish and other Iraqi opposition groups. It is this momentous demonstration of Kurdish-Assyrian unity that Mustafa Barzani, leader of the KDP and father of Masoud Barzani, invokes in his 1967 statement.

Following the first Gulf War, the Kurdistan Regional Government was created in 1991, presiding over the safe haven and no-fly zone established by the United States and protected by coalition forces. Under this political configuration, the region’s identity was ethno-nationally Kurdish, but Kurdish leaders made room for Assyrians in the public sphere and civil society. However, disputes began to emerge when Assyrians, displaced by the Ba‘ath regime, sought to return and rebuild their villages now populated by Kurds. Lawsuits have been filed in Kurdish courts relating to 45 or so villages, with little or no effect, and new violations against other villages continue.

After Saddam Hussein’s Ba‘athist government fell in 2003, Assyrian groups active in the opposition turned south to negotiate with the new government in Baghdad. The KDP leadership felt betrayed, preferring to take the lead in discussions involving its “components.” Territories heavily populated by minority communities along the KRG borders, though officially under Mosul’s administration, came to be contested between the central and regional governments. Minorities preferred to administer their regions locally, as was allowed by the Iraqi constitution. Concerned that its territorial goals were being undermined, the KRG co-opted minorities by creating and funding civil society organizations and political groups on whose loyalty it could depend.3 More directly coercive methods followed, which included preventing ballot boxes from reaching contested territories and blocking the creation of independent local police forces. This last step would foreshadow the break in relations between the KRG and minority communities following the 2014 ISIS invasion. As both the Peshmerga, the KRG’s military arm, and Iraqi government forces withdrew from Nineveh and Sinjar, leaving Assyrians and Yezidis to face ISIS’ brutal onslaught alone, community leaders rallied to form independent local forces, as they had done just two decades before.

In a lecture delivered earlier this year, Dr. Muna Yaku, assistant professor of law at Salahaddin University-Erbil, suggested that for minorities to feel fully engaged with the referendum they must have real dialogue with Kurds on equal terms, instead of being treated as guests. She highlighted KRG violations against minority communities ranging from political manipulation of quota seats, the continuation of forced demographic change, and the exclusion or misrepresentation of minorities within educational curricula.4 Dr. Yaku was chosen to represent Christians in a committee formed to amend the KRG constitution, but eventually she withdrew in protest at violations of minority
rights.5 Similarly, Dohuk native Ashur Sargon Eskrya, President of the Assyrian Aid Society-Iraq, recalling atrocities experienced by minorities, insisted: “When our Assyrian Christian people are facing challenges that affect their national existence on their historic lands…the principles of the United Nations Declaration on the Rights of Indigenous Peoples must be adopted in a manner that preserves for our people the right to self-determination and the preservation of their lands and cultural and social heritage, as well as all peoples of the world.”6

A day before the referendum, the high committee for KRG’s referendum issued a declaration guaranteeing the rights of minorities.7 Many community leaders have since criticized that statement, calling it unbinding and shortsighted.8 Whether the referendum drives the KRG to independence or stifles it in the face of mounting pressure, the discussion that led up to it has highlighted the need to revive real and transparent dialogue between the Kurdish leadership and minority leaders, as well as between civil society groups and intellectuals on both sides. Relations between the two will take time to normalize, but engaging with politically independent, local representatives of minorities is a step in the right direction. It is important to remember that only a few decades ago, the Kurds themselves insisted on their community’s rights to full political participation.

Dr. Alda Benjamen specializes in the history of the modern Middle East; in particular she focuses on twentieth-century intellectual, cultural and social history of Iraq and Syria, Middle Eastern minorities and their transnational networks, and women and gender issues. As a postdoctoral Researcher at the Penn Cultural Heritage Center, University of Pennsylvania Museum, she examines cultural heritage in times of conflict, focusing on intangible heritage within agricultural domains. 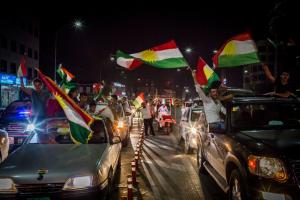